I took this screenshot on Thursday and immediately shared on Twitter where I do a lot of political commentry (@vlcnz) not as an attack of Newland Burling & Co but because it was a perfect snapshot of how the Accomodation Supplement changes in the budget would be seen by many in the property investment market. The post appeared on NB&Co’s Facebook page within hours of last Thursday’s announcement. 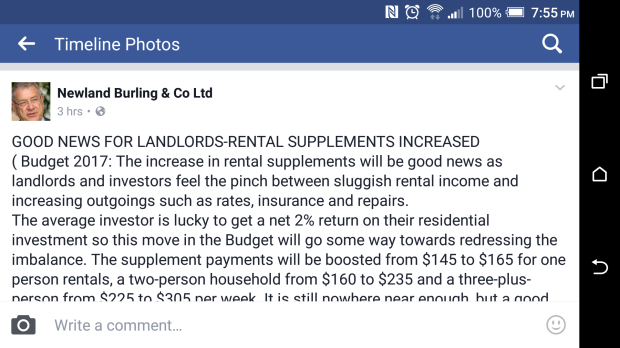 AS is additional income support for people on the lowest incomes, available only to beneficiaries/pensioners and those in low income work. From memory it runs at approximately $2 billion annually. It does not pay a person’s full rental costs, but it provides a nominal amount per week, dependent on the area you live to assist with housing costs. Some believe it artificially keeps rents at the lower end of the market high as it masks the reality that beneficiaries and low income would not be paying rent at this level without it.

So it comes as no surprise today to learn from RadioNZ’s Jane Patterson that the government’s own advice told them an increase in AS would see rent rises, despite the government denying this would happen. While the post from NB&Co was jarring, you can’t fault them for being honest, unlike our government.

But you can vote them out in September…just saying.